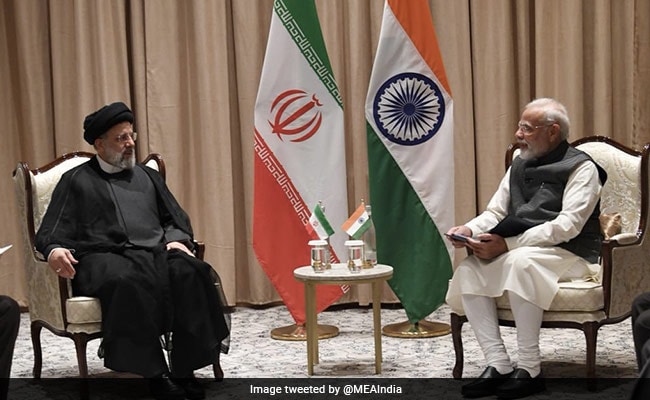 Prime Minister Narendra Modi and Iranian President Ebrahim Raisi where the two leaders reviewed the progress in the development of the Shahid Behesti terminal, Chabahar Port and underscored the importance of bilateral cooperation in the field of regional connectivity.

“The two leaders reviewed the progress in the development of the Shahid Behesti terminal, Chabahar Port and underscored the importance of bilateral cooperation in the field of regional connectivity,” the Ministry of External Affairs press release read.

PM Modi and Iranian President Ebrahim Raisi met in Samarkand, Uzbekistan on the sidelines of the 22nd meeting of the Council of Heads of State of the SCO. This was the first meeting between PM Modi and President Raisi since Raisi’s assumption of office in 2021.

During the meeting, the two leaders discussed many important issues pertaining to the bilateral relationship and expressed their desire for strengthening the relationship further. PM Modi highlighted that India- Iran bilateral ties are marked by historic and civilizational connections, including strong people-to-people contacts.

The two leaders also discussed international and regional developments including Afghanistan. PM Modi reiterated India’s priorities of providing humanitarian assistance to the people of Afghanistan and the need for a representative and inclusive political dispensation in support of a peaceful, stable and secure Afghanistan.

President Raisi briefed the Prime Minister on the status of the JCPOA negotiations. PM Modi extended an invitation to President Raisi to visit India at his earliest convenience.

The Shanghai Five, formed in 1996, became the Shanghai Cooperation Organisation (SCO) in 2001 with the inclusion of Uzbekistan. With India and Pakistan entering the grouping in 2017 and the decision to admit Tehran as a full member in 2021, SCO became one of the largest multilateral organisations, accounting for nearly 30 per cent of the global GDP and 40 per cent of the world’s population.

SCO has potential in various new sectors, wherein all the member-states could find converging interests. India has already pushed hard for cooperation in Startups and Innovation, Science and Technology and Traditional Medicine.

From the time of its full membership, India made sincere efforts to encourage peace, prosperity, and stability of the whole Eurasian region in general and SCO member countries in particular.