People Line Up For 24 Hours To See Queen’s Coffin 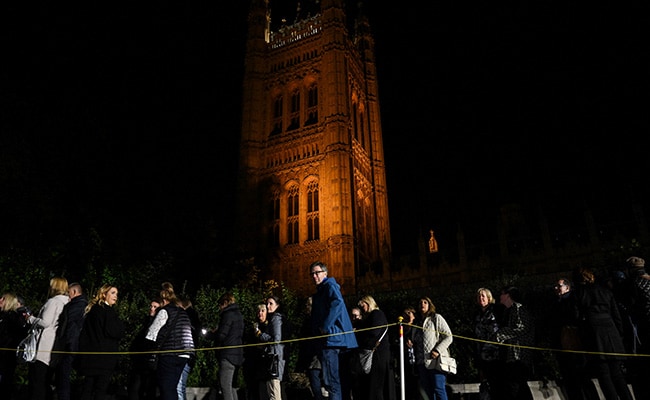 The waiting time in the ‘Elizabeth queue’ now stands at up to 24 hours.

Thousands flocked to central London to file past the coffin of Queen Elizabeth at Westminister Hall, undeterred by the long queues. The waiting time in the ‘Elizabeth queue’ now stands at up to 24 hours.

Holly Carlton and her friend Emma started their journey from Essex to the capital city London over 40 hours ago. They spent the whole night waiting, and are still over a mile away from Queen Elizabeth’s coffin.

“We started at 11.45 am yesterday and we are still here. Spent the night in the cold, and made several friends. It’s been difficult but it’s worth it” said Holly Carlton.

Queen Elizabeth’s death has triggered an outpouring of emotion across the nation, with people queueing for many hours to pay their respects to the monarch, who died on September 8 aged 96 after reigning for more than 70 years.

Her coffin is lying in state at Westminster Hall ahead of her funeral on Monday.

A member of the Royal family, including King Charles III, is keeping a vigil at the coffin at all times.

Among the thousands queuing was former England football captain David Beckham, who waited 13 hours – surviving on pringles, doughnuts, and sherbet lemons. “I grew up in a family that was all royalists and I think my grandparents if alive, would have been here. So it’s nice to be here to celebrate with everybody, the life of her majesty and the legacy she’s left,” said Beckham.

London is looking a lot different with over 10,000 policemen patrolling the city ahead of the big global event- the funeral of Queen Elizabeth II on Monday. Over 100 heads of state, including US president Joe Biden, will attend the funeral. The Mayor of London Sadiq Khan, who is overseeing the security arrangements said, “In addition to the biggest police force in the country the Met Police, we have officers from every single one of our 43 police forces from across the country. Additionally, our armed forces and personnel, the Royal Air Force, army, navy are supporting us.”

The funeral will take place at Westminster Abbey, a historic church, where the Queen got married. It has a capacity to accommodate 2,000 people.

World political leaders and celebrities like Sir David Attenborough, Sandra Oh, and Gregory Charles will attend the ceremony. The ceremony will be broadcast live in cinemas and cathedrals across the nation. After the funeral, the Queen’s coffin will be taken in a procession to Windsor castle – which has been the Queen’s favourite home.