No Efforts Made For Decades To Reintroduce Cheetahs In India: PM Modi 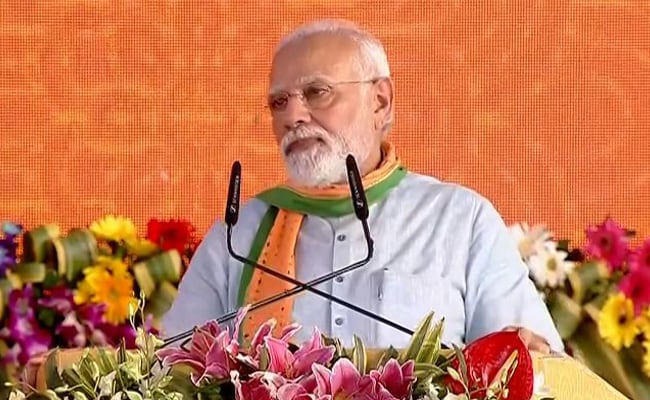 “Cheetahs will sprint again in KNP and will restore grassland ecosystems,” the Prime Minister said.

Prime Minister Narendra Modi on Saturday hit out at the previous governments, saying that no constructive efforts were made to reintroduce cheetahs in India after they became extinct from the country seven decades ago.

He also said that Project Cheetah, under which the felines were reintroduced, was his government’s endeavour towards environment and wildlife conservation.

Prime Minister Modi, who turned 72 on Saturday, was speaking after releasing two of the eight cheetahs flown in from Namibia into special enclosures in the Kuno National Park (KNP) in the Sheopur district of Madhya Pradesh.

“It is unfortunate that we declared cheetahs extinct in 1952, but for decades no constructive efforts were made to reintroduce them in India. Now, with new strength and vigour, the country has embarked on the project of reviving the population of cheetahs during this ‘Amrit Kaal,” he said.

In his address after kicking off the cheetah introduction project conceived by the previous United Progressive Alliance (UPA) government in 2009, Prime Minister Modi also thanked Namibia for help in the programme to reintroduce cheetahs in India.

“I thank our friendly nation Namibia and the government there for their help to reintroduce cheetahs in Indian soil after decades,” he said, adding that only three cheetahs were left in the wild in India in 1947 that was unfortunately hunted.

The last cheetah died in the country in 1947 in the Korea district in present-day Chhattisgarh, which was earlier part of Madhya Pradesh, and the species was declared extinct from India in 1952.

The ‘African Cheetah Introduction Project in India’ was conceived in 2009. A plan to introduce the big cat in the KNP by November last year had suffered a setback due to the COVID-19 pandemic.

“Project Cheetah, under which the cheetahs were reintroduced in the country after they became extinct seven decades ago, is our endeavour towards environment and wildlife conservation. Cheetahs are our guests; we should give them a few months to make Kuno National Park their home,” Prime Minister Modi said.

He asked people to wait for some time to give time to cheetahs to make their territory in KNP.

Prime Minister Modi said, “It is right that when nature and environment are conserved, our future becomes secure. It also opens up vistas for development and progress.

India is trying to revive the population of cheetahs as per the international guidelines and there is a need to ensure that these efforts do not go in vain, he added.

“Cheetahs will sprint again in KNP and will restore grassland ecosystems and bolster biodiversity…Nature and environment, animals and birds are not just the subjects of sustainability and security for India, but they are also the basis of our sensibility and spirituality,” he said.

In the 21st century, India is sending out a message to the world that economy and ecology are not opposite fields. India has shown the world that by protecting the environment, the country can also progress, the prime minister said.