Sonam took to Instagram to share multiple photos of Harsh to wish her younger brother. While the first few are monochrome photos of Harsh, a couple of photos also had Sonam and her husband Anand Ahuja posing with the Thar actor.

“Happy happy Birthday to my very Handsome brother. I have an incredibly soft spot for you and can thus never say no to you. Love you so much Harsh. Have the best year, you deserve it . @harshvarrdhankapoor,” Sonam Kapoor wrote.

Father Anil Kapoor also wished his son and ‘best bud’ on his birthday. Sharing photos from Harsh’s many films, the actor wrote, “Happy Birthday Harsh!! My son & best bud!! I just want you to know that I will always believe in you.. and your choice of shoes! 🤣🤣 Love you! Here’s to never losing faith and hope 🥂.” The two, as readers would know, have worked together AK vs AK and Thar.

Sunita Kapoor also posted gorgeous photos of her son, writing, “Happy birthday to the love of my life Who I love more than life itself .” Harsh Varrdhan replied with multiple heart emojis, while choreographer-filmmaker Farah Khan also dropped a cheeky comment, as she wrote, “Happy birthday to sunita s boy .”

Rhea Kapoor, on the other hand, shared a witty story on her Instagram account. Posting a photo of Harsh Vardhan, Rhea wrote, “”Happy birthday to my handsome brother @harshvarrdhankapoor. love you I’ll say it once a year.” 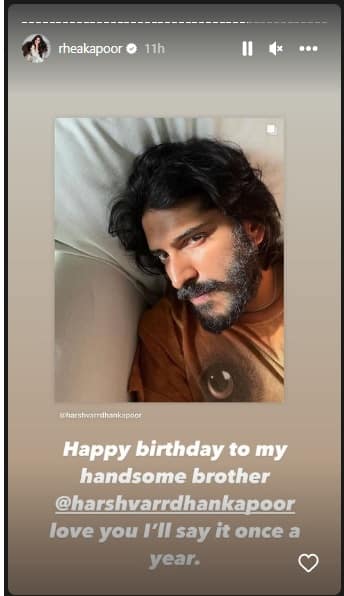 The youngest son of Anil Kapoor, Harrshvardhan Kapoor made his acting debut with Bhavesh Joshi. His father had once revealed that people often ask him about Harsh’s film choices and tell him to advise him about his career.

He told HT, “Sometimes it is very difficult to make people understand when they ask me, ‘Tu apne bete ko samjhata nahi? Usko bol thodi commercial film karne ke liye (You don’t give advice to your son? Tell him to do some more commercial movies). Why doesn’t do those starry roles?’ And I say, ‘He’ll do when he simply feels that he wants to do it. I don’t want to tell him ‘you do this, you do that, or anything.’ I believe I should let my children do what they believe in.”

He went on to add that if somebody is doing something that he thinks is completely wrong, he steps in to tell them that they are making a big mistake, but if they wish to do it, he lets them. “So, I’m not those fathers who sit down with a stick and give gyaan or advice. In fact, the whole family is such… very independent, and they have their own point of view, their own tastes in everything — films, food, clothes, and aesthetics — everybody’s different. There’s nobody who’s anybody’s fan in our house,” added Anil.