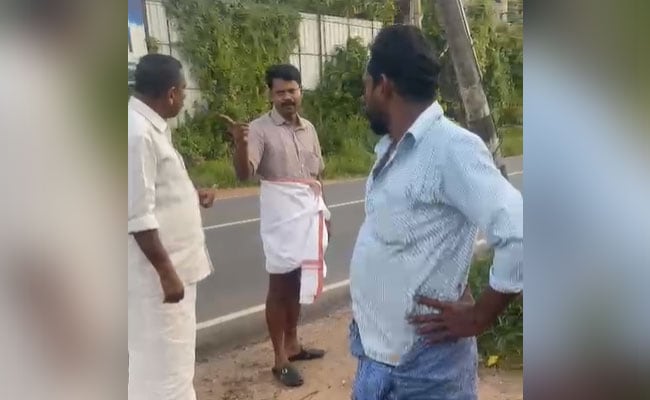 The shop owner S Fawaz has filed a complaint with the Kunnicode police.

Eight days into its ambitious ‘Bharat Jodo Yatra’, Congress is facing criticism for alleged hooliganism after videos surfaced in Kerala’s Kollam of those seeking financial support for the party’s march threatening a vegetable shop owner and ransacking his shops for not contributing ‘sufficient’ money. The party, calling the incident ‘unacceptable’, said it has suspended three party workers who were involved.

“They do not represent our ideology, and such behaviour is inexcusable,” Kerala Congress President K Sudhakaran tweeted.

Three party workers involved in an unacceptable incident in Kollam have been suspended with immediate effect. They do not represent our ideology and such behaviour is inexcusable. The party is crowdfunding small donations voluntarily unlike others who get corporate donations.

Videos show a group of men in animated arguments with vegetable vendors, some carrying posters of the ‘Bharat Jodo Yatra’. They allegedly threatened to kill a shop owner and attacked workers in the shop.

One of them could be seen throwing away vegetables and creating chaos in the shop. Those seeking funds had reportedly demanded Rs 2,000, but the shop owner was able to give only Rs 500. The men collecting funds threatened, saying nobody will go alive without giving the amount demanded.

They were a group of five, which included Youth Congress state General Secretary H Aneesh Khan.

The shop owner S Fawaz has filed a complaint with the Kunnicode police.

Led by Congress MP Rahul Gandhi, the 150-day long 3,500-km foot march from Kanyakumari to Kashmir was launched from Kanyakumari in neighbouring Tamil Nadu on September 7 and will cover 12 states and two Union territories. The Yatra will traverse through Kerala for the next 18 days, reaching Karnataka on September 30. It will be in Karnataka for 21 days before moving north. The Padyatra (march) will cover a distance of 25 km every day.

Rahul Gandhi on Tuesday said that the spirit of the Bharat Jodo Yatra is to bring Indians together irrespective of religion, community, and remind them that this is one country, and it will be successful if we stand together and are respectful towards each other.

According to Congress, the ‘Bharat Jodo Yatra’ is being held to combat the divisive politics of the BJP-led Centre and to awaken the people of the country to the dangers of economic inequalities, social polarisation, and centralisation of political power.