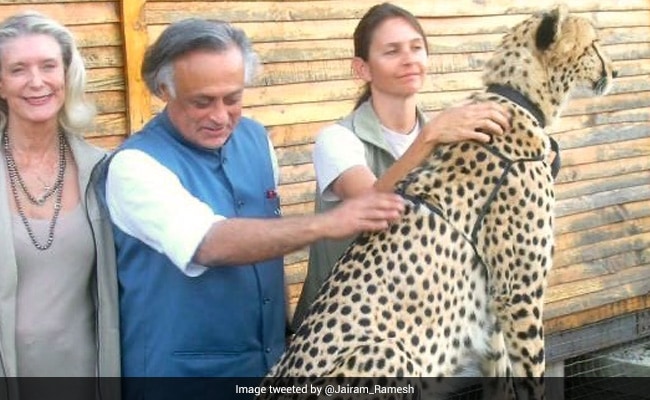 Eight cheetahs were brought to Gwalior from Namibia in a special plane on Saturday morning.

The Congress on Saturday called Prime Minister Narendra Modi’s releasing of Cheetahs in a Madhya Pradesh national park a “tamasha,” orchestrated by him as another diversion from pressing national issues and the ‘Bharat Jodo Yatra’.

Congress general secretary and in-charge communications Jairam Ramesh also alleged that the prime minister “hardly ever acknowledges continuity in governance” and the Cheetah project was the latest example of that.

“PM hardly ever acknowledges continuity in governance. Cheetah project going back to my visit to Capetown on 25.04.2010 is the latest example,” Mr Ramesh, who was the Environment and Forest minister during 2009-11, said in a tweet.

“The tamasha orchestrated by PM today is unwarranted and is yet another diversion from pressing national issues and Bharat Jodo Yatra,” he said.

When tigers were first translocated to Panna and Sariska during 2009-11, there were many prophets of doom, Mr Ramesh said, adding that they were proved wrong.

“Similar predictions are being made on the Cheetah project. The professionals involved are first-rate and I wish the project the very best!” he said.

PM Modi on Saturday released cheetahs flown in from Namibia into a special enclosure at the Kuno National Park (KNP) in Madhya Pradesh.

He also clicked some pictures of the cheetahs on a professional camera after releasing them.

Eight cheetahs were brought to Gwalior from Namibia in a special plane on Saturday morning as part of the cheetah reintroduction programme.

The animals were later flown to the KNP, located in Sheopur district, in two Indian Air Force (IAF) helicopters.

The prime minister, who is celebrating his birthday, released two of these cheetahs into an enclosure at the KNP.

The ‘African Cheetah Introduction Project in India’ was conceived in 2009.

A plan to introduce the big cat in the KNP by November last year had suffered a setback due to the COVID-19 pandemic, officials said.