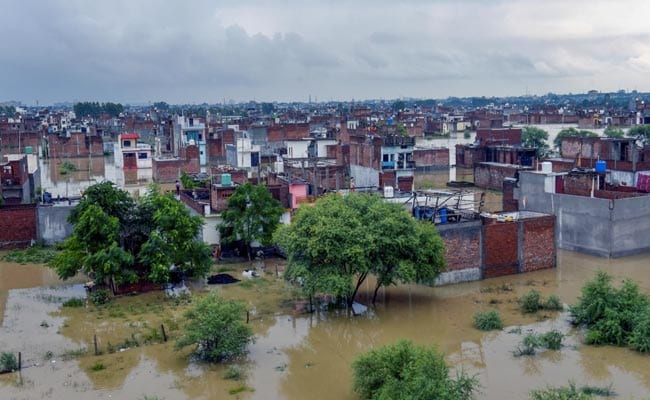 Heavy overnight rains in Uttar Pradesh Friday led to the deaths of at least 22 people, including nine labourers who were buried alive under the debris when an under-construction wall in the state capital collapsed on their huts.

The only survivor in the Lucknow incident, where a portion of the boundary wall of an Army enclave collapsed following rains, was a man, named Golu, who made the call to police from under the rubble.

Officials said the 13 other deaths were reported from Unnao (five), Fatehpur (three), Prayagraj (two), Sitapur, Raebareli and Jhansi (one each).

On the Lucknow collapse, Joint Commissioner of Police (Law and Order) Piyush Mordia told PTI, “Some labourers were living in huts outside the Army enclave in the Dilkusha area. Owing to heavy overnight rains, the boundary wall of the Army enclave collapsed,” “We reached the spot around 3 am. Nine bodies were pulled out from the debris. One person was rescued alive,” he said.

All the nine people killed are from Jhansi district.

“As we reached the spot 15 minutes after the message was passed on to the police station, our first priority and effort was to locate the person who had made the call to the control room, and pull him out from the debris,” ACP Cantonment Anup Kumar Singh, who was also present at the spot of the incident, told PTI.

“It was Golu, who had made the call to the police control room. After pulling him from the debris, he was sent to the Dr Syama Prasad Mukherjee (Civil) Hospital,” he said.

“I am deeply saddened by the news of death of people due to a wall collapse in Lucknow. My condolences to the bereaved families. I wish the injured a speedy recovery,” Murmu tweeted in Hindi.

The Chief Minister’s Office said in a release the state government announced a financial assistance of Rs 4 lakh each to the family of the deceased.

Deputy Chief Minister Brajesh Pathak, who represents the Lucknow Cantonment assembly constituency in the state assembly, visited the site and later the Dr Shyama Prasad Mukherjee (Civil) Hospital, and enquired about the wellbeing of the injured persons admitted there.

The state recorded widespread heavy rains since Thursday. According to India Meteorological Department (IMD) the state recorded 32.2 mm average rainfall on Friday which is 428% higher than the LPA (Long Period Average) of 6.1 mm.

In Kantha village, three siblings — Ankit (20), Ankush (4) and Unnati (6) — died after a wall of their house collapsed due to overnight rains, Additional District Magistrate (Finance and Revenue) Narendra Singh said.

According to the villagers, the incident took place between 2 am and 3 am when the parents of the deceased had come out to assess the damage caused to their house due to rains.

The bodies have been sent for a post-mortem examination, officials said.

The CMO’s statement said three people died in Fatehpur (3) and one in Sitapur.

In Prayagraj, two children — Shreya (4) and Amit Kumar (5) — were killed after a wall of their mud house collapsed over them. District Magistrate Sanjay Kumar Khatri said the incident occurred in a village under Mamrez police station area on Friday afternoon.

In Raebareli, a three-year-old child was killed in a similar incident on Friday. “Rajneesh was killed when a house collapsed in Mauryapur area. His two siblings and mother also sustained injuries in the incident and are hospitalised.” Meanwhile, in Jhansi a two-story building collapsed in Sipri Bazar area following heavy rains Thursday night.

District Magistrate Ravindra Kumar said, “Three people were present in the house which collapsed in Sipri Bazar. All the three were rescued and rushed to hospital. One of the injured Suresh (40) later succumbed to his injuries at the hospital during wee hours of Friday.” Chief Minister Yogi Adityanath directed officials across districts to monitor relief work and ensure that financial help is provided to the affected swiftly.

Financial assistance should also be provided to those whose houses have been damaged or animals have died, he said.

The CM also asked officials to conduct surveys to assess the damage caused to crops due to rains, the statement said.

Samajwadi Party president Akhilesh Yadav hit out at the BJP government over the loss of lives and property after heavy rains, saying a bout of rainfall “washed away” all its development schemes.

(This story has not been edited by NDTV staff and is auto-generated from a syndicated feed.)